Headed to the New Horizon Mothership in Kansas

Ok, August 6th rolled around and it was time to end our stay in Pagosa Springs and head towards Kansas and the New Horizons mother ship to have some warrantee work done. YES, I said August 6th, that’s how far behind we are on the blog LOL!!! Hey, when the good times are rolling it’s hard to take time out to keep up on the blog I’m afraid.

Once we lifted our jacks and hit the road we really had no destination in mind to stop at on our trip to Kansas, we just knew that we had roughly 650 miles to cover and we had 4 days to cover them so there was no real rush except that we knew the earlier we rolled in on a weekend the better chance we had of getting a spot in the New Horizon lot with power hookups.

The first day on the road we traveled took HWY 160 up over Wolf Creek Pass, through South Fork and to Del Norte where we switched to HWY 112 and then HWY 285 and followed it until we reached Poncho Springs where we jumped on HWY 50 which wiggled its way through Cotopaxi, Texas Creek and Canon City and finally Penrose where we switched to HWY 115 which took us way to close to heavily trafficked Colorado Springs LOL!!! 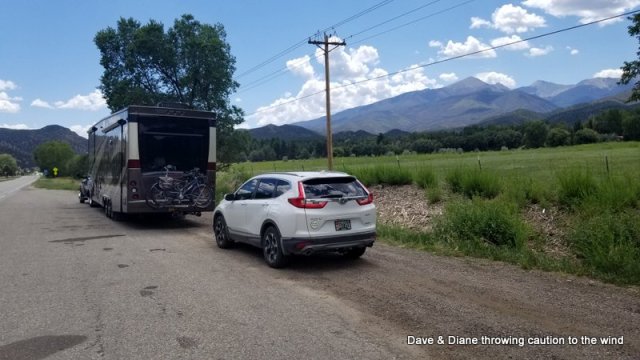 Just a spot we pulled over for lunch on our first day of travel.

Once we wiggled our way through Colorado Springs on HWY 24 we were finally spit out at Limon Colorado which sits right on I-70. That made for a 315 mile day that consisted of mainly 2 lane mountain roads and one high traffic area “Colorado Springs” so we figured that was enough for one day, more than enough.

There are a couple truck stops in Limon but we have never been fond of parking in truck stops so after a little effort we found a side street where we parked next to a grassy field without the constant groan of truck engines and the annoying sound of refrigerated trailers running all night and had a pretty peaceful night.

Home for the night.

Once we settled in Diane made a run to Taco Bell, we watched a little TV and we called it a night.

We watched as a storm skirted around us.

Friday morning (8/7) after a good night’s sleep we had breakfast and a rather leisurely morning knowing that we only had 384 miles remaining before reaching New Horizons and had 3 days to do it in if we wanted to take that long.

**OK OK, I know some of you detail oriented people are saying  WAIT A MINUTE, you said you had roughly a 650 mile trip planned from Pagosa Springs to the New Horizon plant and you drove 315 miles on the first day so you should only have 335 miles remaining NOT 384. Well go ahead and shoot us, we decided to take a more scenic route rather than the most direct which added a few miles, geezzzz LOL!!! **

During breakfast we decided that we should make Oakley Kansas a stopover before making our way to New Horizon because we knew of a nice little campground that was an easy off, easy back onto the freeway that had a fuel stop right across the road and even more importantly it had a restaurant called Cap’n Jacks Pub that we have eaten at a couple times before and we knew that we loved the food. Plus it was only 160 miles down the road which sounded pretty darn good after the long travel day we had the day before.

A few more rigs rolled in that evening but this is how it is during most days.

So we called ahead and secured a site for 1 night, had a nice short mellow travel day, rolled into the High Plains RV Park about noon and just had a relaxing afternoon until about 5:30 and then had another great eating experience at Cap’n Jacks before chillin in front of the TV the rest of the evening.

You can see Cap’n Jacks right in front of us.

Saturday morning (8/8) after out stopover in Oakley we only had 220 miles remaining to reach New Horizons and that was all freeway, not our preferred roads to travel but for this trip it seemed suitable and made for another easy travel day and we rolled into the New Horizons lot around 1 in the afternoon.

Once we reached New Horizons we were lucky enough to find a spot with power and water right in front of the shop where we needed to be to have our warrantee work done so the pan of arriving early in the weekend worked.

Then all we had to do was kill time until our appointment on Monday morning, NO PROBLEM!!