It’s getting warm down south and we are feeling dormant.

I don’t know if we should feel like losers or feel that we are smarter than the average bear but we are still hunkered down at our winter location in Arizona, yup the one we were supposed to leave on April 1st.

The crop out our back window is growing.

It just seems that after we canceled our summer plans I just couldn’t get excited about coming up a new plan and a plan someplace that we wouldn’t still be effected by this Coronavirus crap so the easy thing to do is sit for now, and like I have mentioned before, Diane is content just going with the flow. But then as our friends leave and the park empties we can’t help but feel a little bummed and wonder if we have been taking everything too seriously. But then on the other hand when we see reports of people gathering in huge crowds around the country absolutely ignoring the social distancing thing we feel pretty good about our decision again. 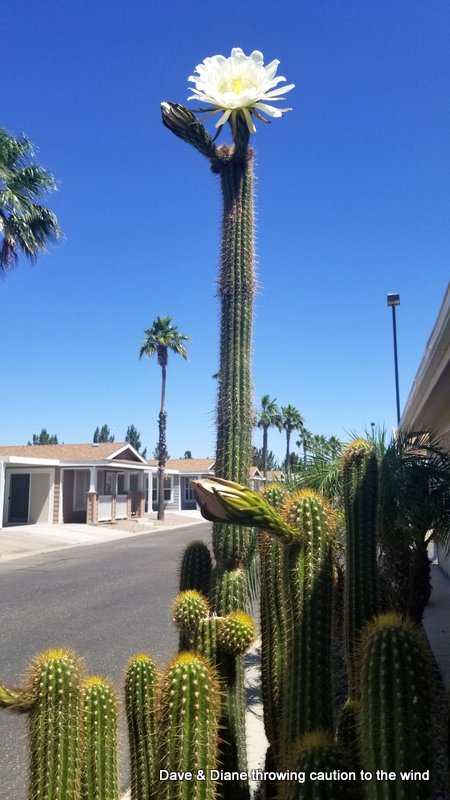 Oh well, it will all come out in the wash and we have come to the realization that this is just going to be an oddball summer and we are just going to float through it in a way that fits us.

But things have gotten easier to tolerate, we got back to playing Pickleball most mornings, we can now golf and we still have walks and bike rides to occupy our time so things are good, enough.

When the Pickleball courts first opened we made the decision the play within a small close nit group of 6 friends that we knew were pretty much staying in the resort with trips only to the grocery store (and some have been having groceries delivered but we have not gone that route) in order to keep the possibility of any unnecessary exposure to whatever is lurking about to a minimum. 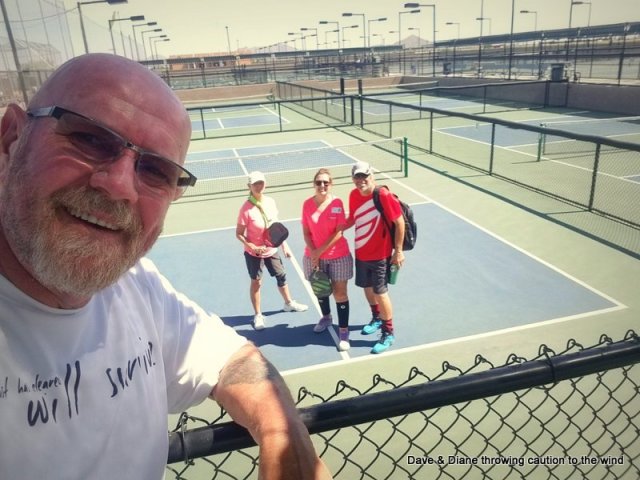 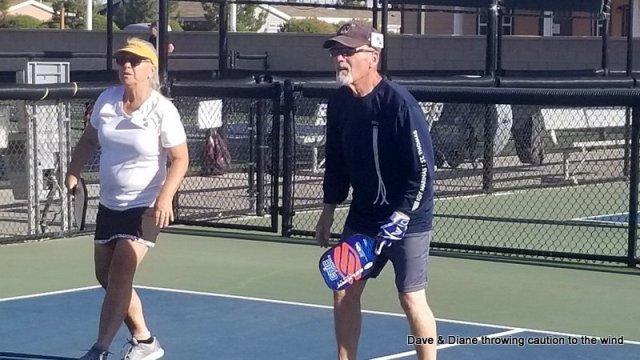 We managed to do that for a couple weeks and we had a lot of laughs but the mix of players levels were pretty scattered and the lure of stronger play was just too much to resist and Drew and I found ourselves mixing in with another small group that we felt very safe with and that left 4 of our original group to play together that really had pretty even playing skills so it worked out ok. Plus we didn’t have 2 people sitting out between games.

Then our good friends Drew & Becky decided to buy a new truck that happened to be in Texas so they decided to leave and head south to pick it up and spend the remainder of the summer there so that changed the dynamics a little, mainly for Diane but we adapt. We are happy for them because they have been battling an older truck with issues so this will be a nice change for them.

Diane saying “see ya” to Maddie 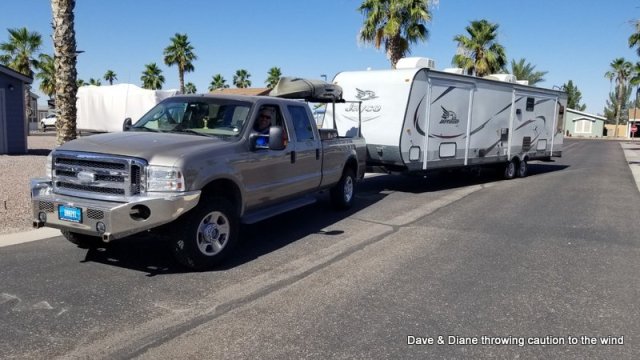 See ya in November.

Oddly enough at about the same time the dynamics of the park started changing, more people started leaving, friends were getting hurt and unable to play Pickleball, and the temperatures started getting into the 100’s pretty regularly, actually around the 110 degree range.

About then we switched gears a bit and started playing golf about every morning and starting our round at 7AM and depending on the day we might just play 9 holes or 18, it just depended on what we felt like and what we had planned the remainder of the day (we mainly played 18 holes each day).

Our friends Clair & Stan were getting ready to leave the area as well so we all decided to get together one morning for some golf before they left.

We all went out and beat the heck out of those little white balls as if we just caught them trying to steal our bicycles. And they sure tried to get away from the beating by hiding behind every tree and in every pond and stream they could find LOL!! 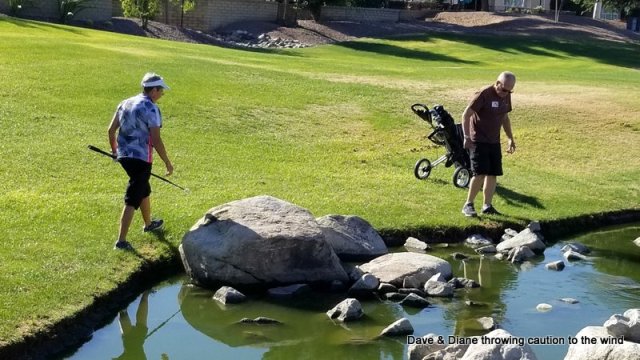 What are you guys looking for?? As if we don’t know 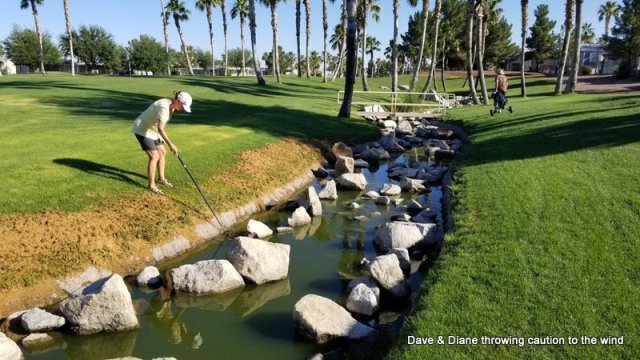 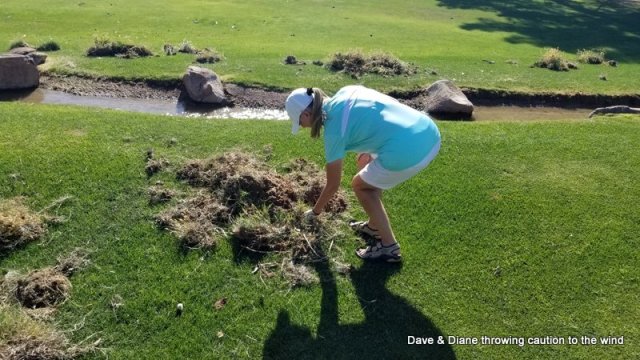 Diane, is that the ball washer? 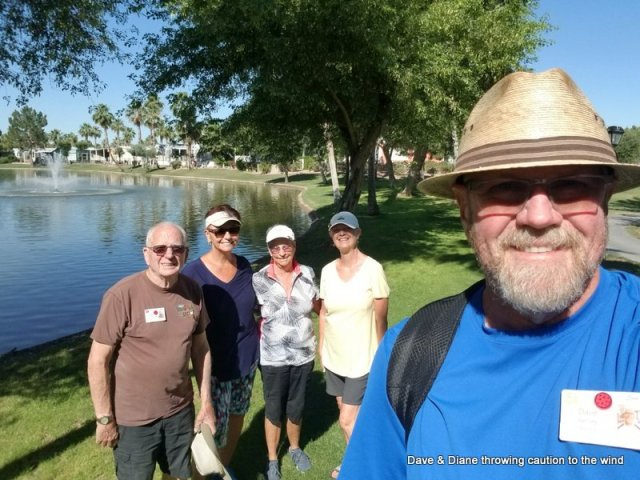 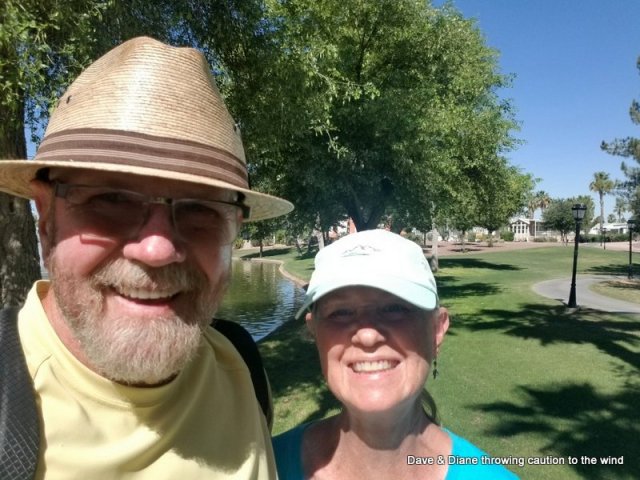 Oh, have we ever mentioned that we found a great meat shop in the area? Yup, we were told about The Meat Box in the town of Maracopa about 26 miles from our campground.

We have made about 3 trips there this season and we just had to go one last time to make sure our freezer is full of good meat before we leave the area and we stepped up to the plate this trip out LOL!!!

If you are in the area it’s worth a visit if you want some high quality meat but we have to warn you, they AIN”T cheap!! But the meat is top shelf.

As far as any plans go, nothing has changed since our last update, we are paid up through June 7th here in Casa Grande and we have no reservations in place until July 13th in Pagosa Springs. To be honest if the temps would settle down a bit and stay anywhere under 105 we would just stay put as long as we can before heading to Colorado. With the humidity levels in the single digits here it really isn’t that bad when it’s around 100, honest LOL!!

That’s it for now.

6 Responses to It’s getting warm down south and we are feeling dormant.