Well, we did our yearly analysis blog update talking about the past so I guess we could talk about what our plans are for 2020. Yes we said “PLANS” for 2020.

In the 7 years of being on the road there was only 1 year that we made plans far in advance (other than our winter reservations) and that was for roughly a 3 month period when we headed over to Wisconsin and Michigan, making plans just normally isn’t our thing.

So why plans for 2020 you ask, well when we decided to switch to a 5th wheel part of the “plan” was to be more destination oriented AND to spend more time in one area instead of bouncing around as much. And ok, I will admit that because we are still pretty new with the 5th wheel I kind of wanted to have a better idea of just where we were going. With the motorhome I was very confident that I could get us out of anything I got us into but my confidence level isn’t as high yet with the 5th wheel, not worried about it but just being a little more aware for a bit I guess. 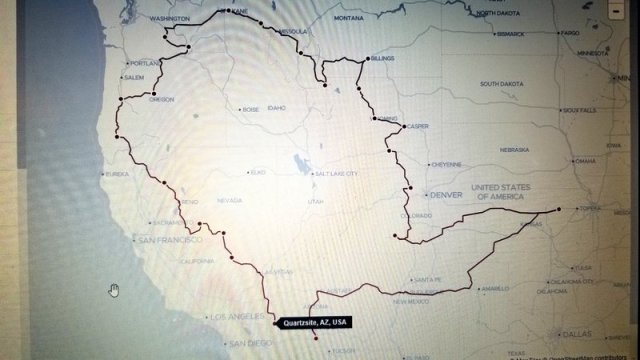 From there we know that we want to check out some RV lots in a development in Montana that has caught our attention and we know that we want to spend a couple weeks exploring Yellowstone followed by Billings Montana and then Cody Wyoming and all of those areas are tourist hot spots so we almost had to make reservations in advance.

After Cody I found a pretty new resort at higher elevations in Colorado that I think has possibilities for a future summer destination and then from there we have a New Horizon Owners Rally in Creede Colorado that we needed to reserve for.

So with that said we will wing it at boondocking spots once we leave Arizona in April until we roll into Grants Pass and once we get to Grants Pass we have reservations in all spots along our path mentioned until we leave Cody in mid-August. At that point we will free wheel it until our reservation at the resort in Colorado on August 27th which will roll us into our reservation in Creede on September 3rd.

Once we leave Creede we will head directly to the New Horizon mother ship to have some warranty items taken care of before we start our trek south again for the winter which at this point we are pretty sure will be in Arizona again.

I figure that we will be at the New Horizon factory for at least two weeks so that will probably leave us a month to get from Kansas to Arizona, hmm, maybe the Albuquerque Balloon Festival might work into our schedule on our way south. Could that be another “planned” stop LOL!!

You know what’s funny, we haven’t even started our 2020 travel season and we are already starting our plans for 2021 LOL!! And that’s funny coming from a couple that normally never plans more than a week in advance until this year, WHATS HAPPENING TO US!!!

Oh, as far as 2021 goes, we are thinking about the north east to hit the New England states and then down the east coast so once again that will require reservations to get the good spots in the areas we want to visit. So if any of you have suggestions we are certainly open to them.

But for now we are still enjoying our time this winter in Arizona even though it’s a little cooler than normal and still have 2 ½ months remaining before we start our 2020 summer travels.

This entry was posted in A little about us and tagged #futurenewhorizons, #Newhorizon, full-time, fulltime in a 5th wheel, fulltime lifestyle, fulltime travel, New Horizon Ambassador. Bookmark the permalink.

Our View From Here

Stepping out of our comfort zone