Travel day and a little time spent around Oakley Kansas

Wednesday (9/27) we lifted our jacks and rolled out of the Prairie Band Casino, jumped on I-70 and drove 307 miles to the High Plains Campground in Oakley Kansas.

Dang, driving through Kansas is a lot like driving through Texas with lots of nothing to look at. But that’s partly due to the highway we drove I’m sure, but maybe not LOL!!

Once set up in our site and had a few minutes to relax we headed out for a short driving tour of Oakley to get a lay of the land before heading home to have dinner and chill the remainder of the evening.

Thursday morning (9/28) after our morning routine we decided to drive out to the Monument Rocks, sometimes referred to as the Chalk Pyramids about 25 miles away from our campsite. 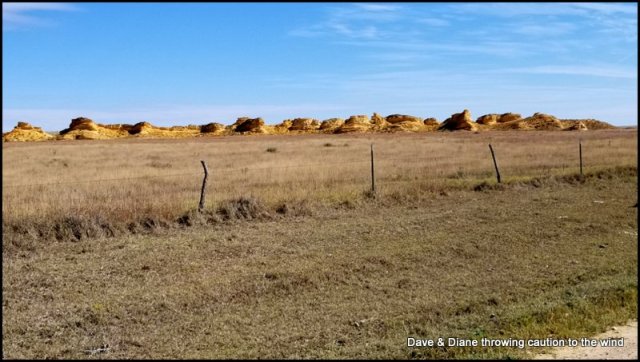 Even though it’s pretty much popcorn fart dry in the area now, the Smoky Hill River once had enough flow to carve unique “badlands” in the fossil-rich chalk layers of western Kansas. 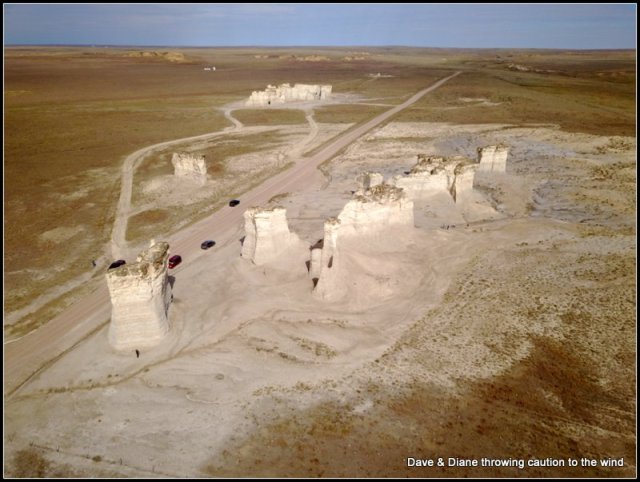 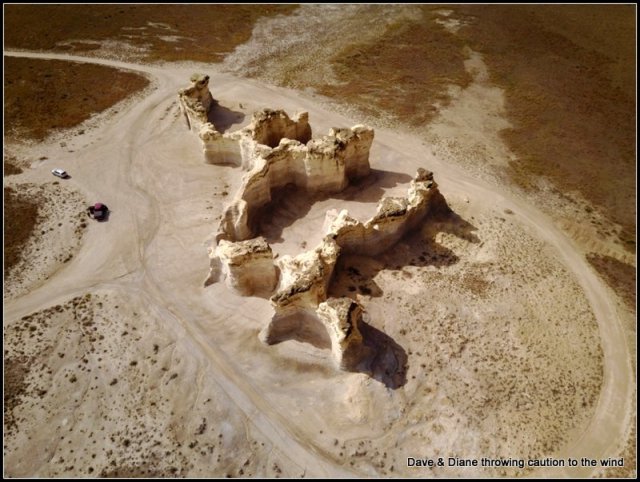 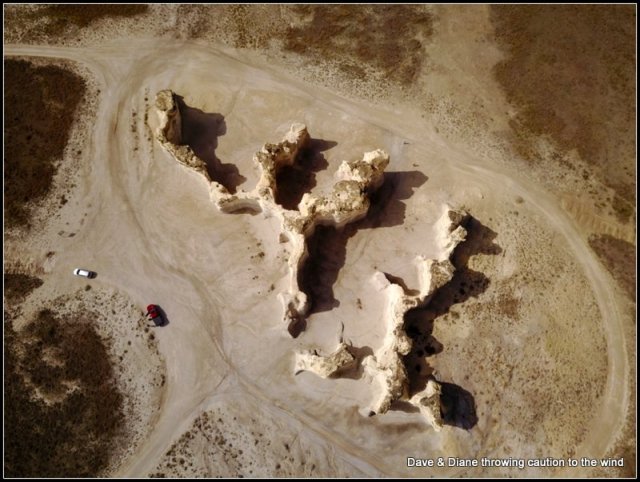 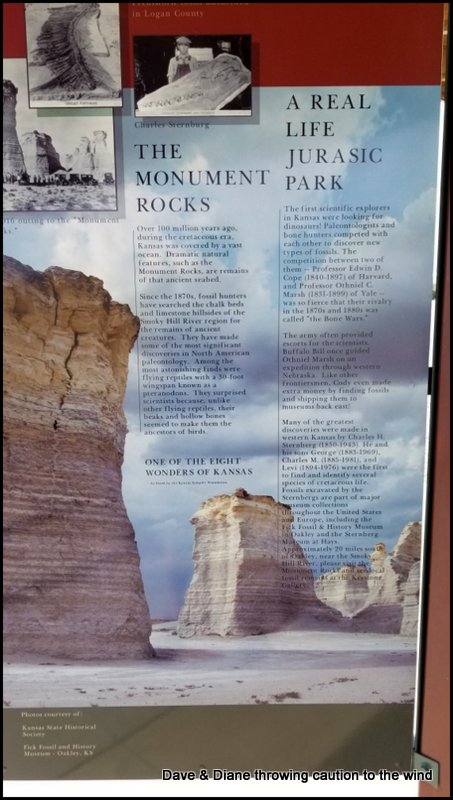 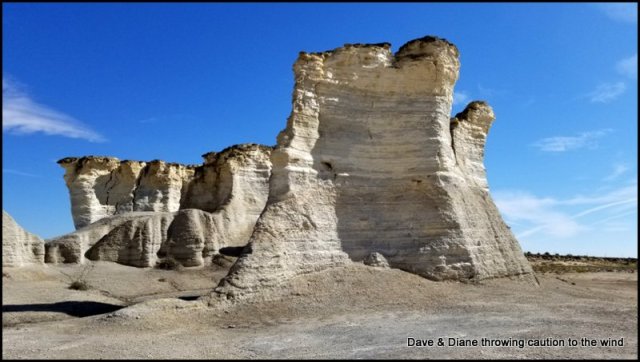 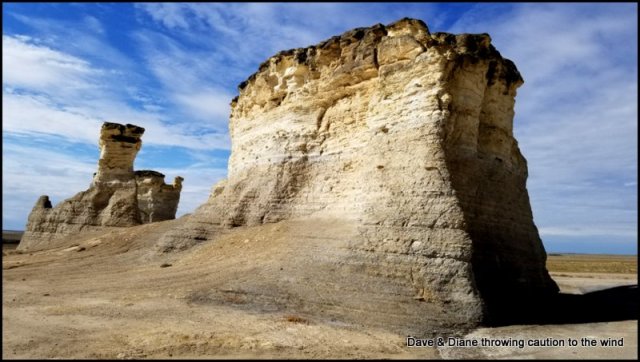 The chalk formations reach a height of up to 70 ft and are estimated to have been formed 80 million years ago.

Compared to what you see in Utah these may pale in comparison but we enjoyed walking around and having a picnic lunch here just the same. 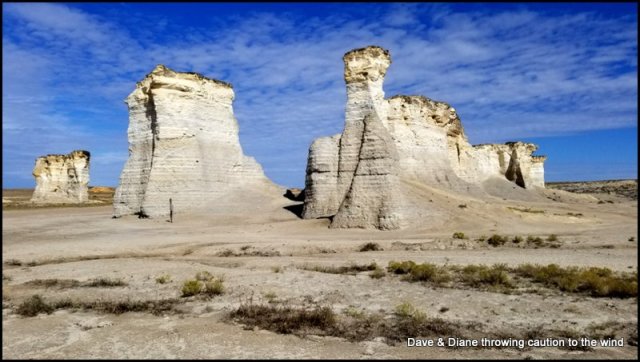 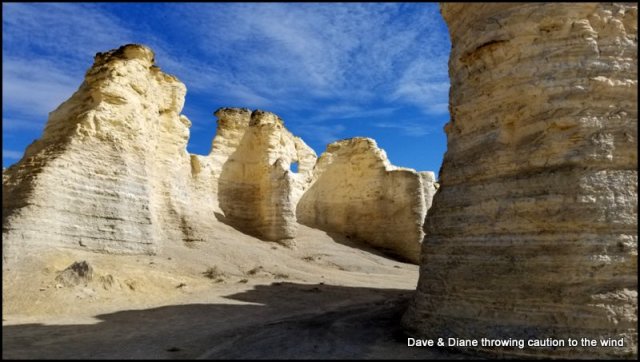 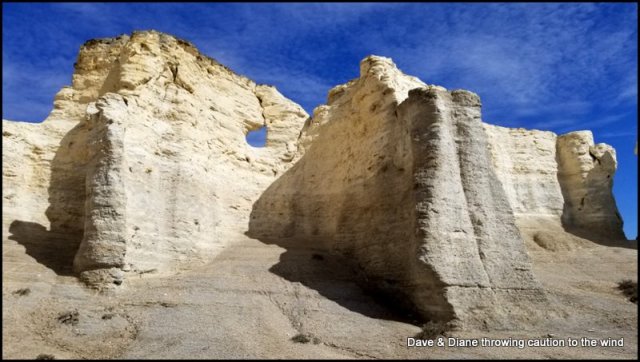 After our time at Monument Rocks we headed back to Oakley and stopped in at the Buffalo Bill Cultural Center for a look see. 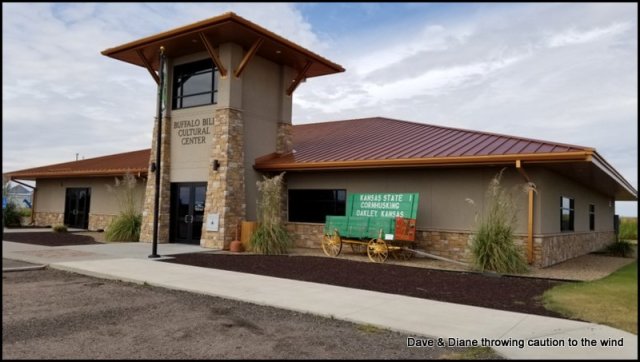 The Cultural Center doubles as the Visitor Center and has a few small displays, a small gift shop a short interesting movie about the area and plenty of information about the area, and the parking lot is large enough for big rigs to navigate and there is a nice grassy area for pets to stretch their legs. 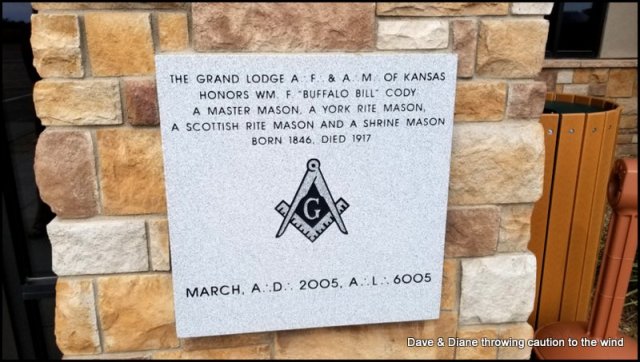 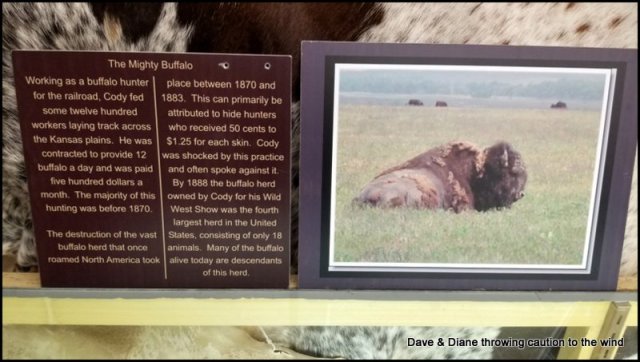 There is also a pretty nice bronze sculpture out front of Buffalo Bill on his horse (weighing in at 5000 lbs) and a buffalo (weighing in at 4000 lbs) that cost approximately $450,000 to build at the time.

From the beginning of the Buffalo Bill project until the sculpture was put in place took six years. It had its beginning as a sketch on a napkin at a restaurant in Garden City, KS. Once the monumental piece was started, it took about three years to complete. 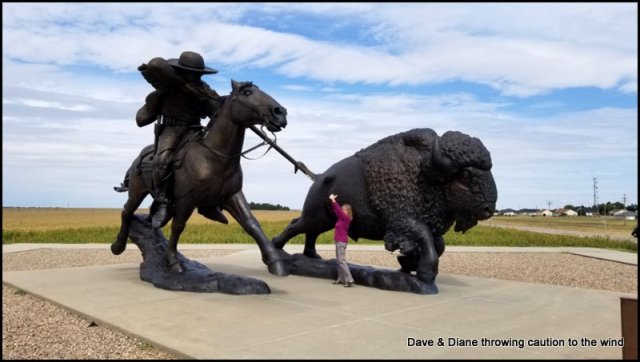 The sculpture was first created in clay. After it was completely sculpted it had to be broken down in over 100 smaller pieces to be cast separately. After being cast, they were bronze welded together, chased, and then the final patina was applied.

The sculpture is approximately two times life-sized with the Buffalo Bill sculpture standing 16′ tall and was dedicated in May 2004 and is owned by the Wild West Historical Foundation, Inc.

Once we finished up with Buffalo Bill we headed home to get cleaned up a little before going over to Cap’n Jacks Pub for some dinner.

Cap’n Jacks doesn’t look like much from the outside but if you are in the area don’t let that fool you because the food was pretty darn good.

After dinner we called it a night and gave a little thought to lifting our jacks the next morning. We decided to get away from I-70 and take some back roads for our travel day on Friday and boy were we on backroads LOL. But we will leave that for our next update.